Yesterday, Oxfordshire County Council submitted its bid for an initial £600,000 of funding:

“…to improve cycling infrastructure, parts of the roadwork network and footpaths as the nation responds to the COVID-19 pandemic.”

It’s part of a package of measures announced by the government on 9th May aimed at preventing gridlock because social distancing has reduced the capacity of public transport.

“Fast-tracked statutory guidance, published today and effective immediately, will tell councils to reallocate roadspace for significantly-increased numbers of cyclists and pedestrians. In towns and cities, some streets could become bike and bus-only while others remain available for motorists. More side streets could be closed to through traffic, to create low-traffic neighbourhoods and reduce rat-running while maintaining access for vehicles.”

In the forward to the new guidance the Secretary of State for Transport says:

“The government therefore expects local authorities to make significant changes to their road layouts to give more space to cyclists and pedestrians. Such changes will help embed altered behaviours and demonstrate the positive effects of active travel. I’m pleased to see that many authorities have already begun to do this, and I urge you all to consider how you can begin to make use of the tools in this guidance, to make sure you do what is necessary to ensure transport networks support recovery from the COVID-19 emergency and provide a lasting legacy of greener, safer transport.”

So what will that mean for Witney and West Oxfordshire? What could be introduced within a few weeks to give more space to people cycling and walking? Based on the government’s guidance we have put forward a package of significant changes for Witney that we believe will help people maintain the level of cycling and walking they’ve become accustomed to during the lockdown.

Arguably, the most constrained place in Witney for walking is the eastern end of Corn Street. With narrow pavements and two-way traffic flow it’s not possible to maintain social distancing safely. By making it one-way except for buses and cycles it creates some space to place cones so people can step into the road safely.

Fiveways roundabout at the western end of Corn Street is a major barrier to Cycling. The number of arms coupled with the width of the road means motor vehicles can traverse the roundabout at speed making it unpleasant, and dangerous, for people cycling there.

Closing Tower Hill and Curbridge Road to motor traffic will will make those Roads cycle friendly and reducing the amount of asphalt available around the roundabout with wands will reduce speeds. We’ve drawn up two versions, the one above with wands which reduce the time people cycling to and from Corn Street spend in the vehicle lane, and the simpler one below using cones around the centre to achieve the reduction in speed.

Restricting traffic entering the High Street from the junction with Witan Way reduces traffic in the High Street, and removing a section of parking at the narrowest point and banning the right turn frees up space for a cycle lane for people cycling out of town towards Bridge Street. It is currently impossible to safely pass queuing traffic in the afternoon and this will make cycling far more attractive there.

We’ve added cones where the pavement is at its narrowest and we believe there’s also space to permanently widen the pavement there in future. We’ll check on that.

That reduces the volume of traffic in the town centre while maintaining access to it and its car parks. Taking out more of the on street parking would help reduce it further and create more space for pedestrians, but disabled parking should remain.

There’s not a lot we can do with Bridge Street at the moment – there’s a reason it’s an Air Quality Management Area – but there is space for an outbound bus stop there which will be necessary for the changes we propose for Woodstock Road and Newland.

There just isn’t enough room for cycling and queuing traffic on Woodstock Road and Newland so we propose making sections of them one way except cycles where they meet Bridge Street. This would also reduce the amount of two way traffic along Oxford Hill and the rest of the Woodstock Road and create space for cycle lanes without centre lines.

The down side is that it means the S1, S2, S7 and 233 bus services are affected but without something signicant changing people who live on these roads won’t cycle and it won’t encourage people to go in and out of town via Bridge Street. Why is that important? Because the alternative routes across Woodford Mill and Langle Common are getting congested and it’s difficult to maintain social distancing.

Both those alternative routes have problems where they encounter roundabouts. There’s very little space for people on bikes and walkers where the path meets the roundabout on Witan Way. There is also no exit for people cycling towards Cogges from Langdale Gate. We propose formalising an exit/entry for cycles along with cones to reduce vehicle speeds.

Again, there’s no exit from the roundabout on Hailey Road for people cycling and wanting to access the Woodford Mill path. We propose moving the West End give way line.

We’ve proposed a few more road closures to motor traffic to make cycling in local neighbourhoods less scarey – Farmers Close is one which also helps reduce traffic on New Yatt Road where it meets Woodgreen. We’re also proposing that the many barriers in Witney be removed or eased for families, trike riders and mobility scooter users. And we’re proposing that some places where cycling is currently not allowed are made shared use, such as Marriott’s Walk which became a deadend for cycling when it opened in 2009.

As a package this would finally deliver a direct cross-town cycle route from Oxford Hill to the top of Deer Park Road, joining Sustrans’ NCN 57 with the A40 cycle path to Eynsham and Oxford. This should be signed along with the rest of the network when the second round of funding becomes available.

The other major change we have proposed is a direct cycle route between Witney and Carterton but we’ll cover that in a separate post. 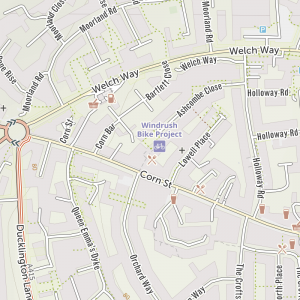